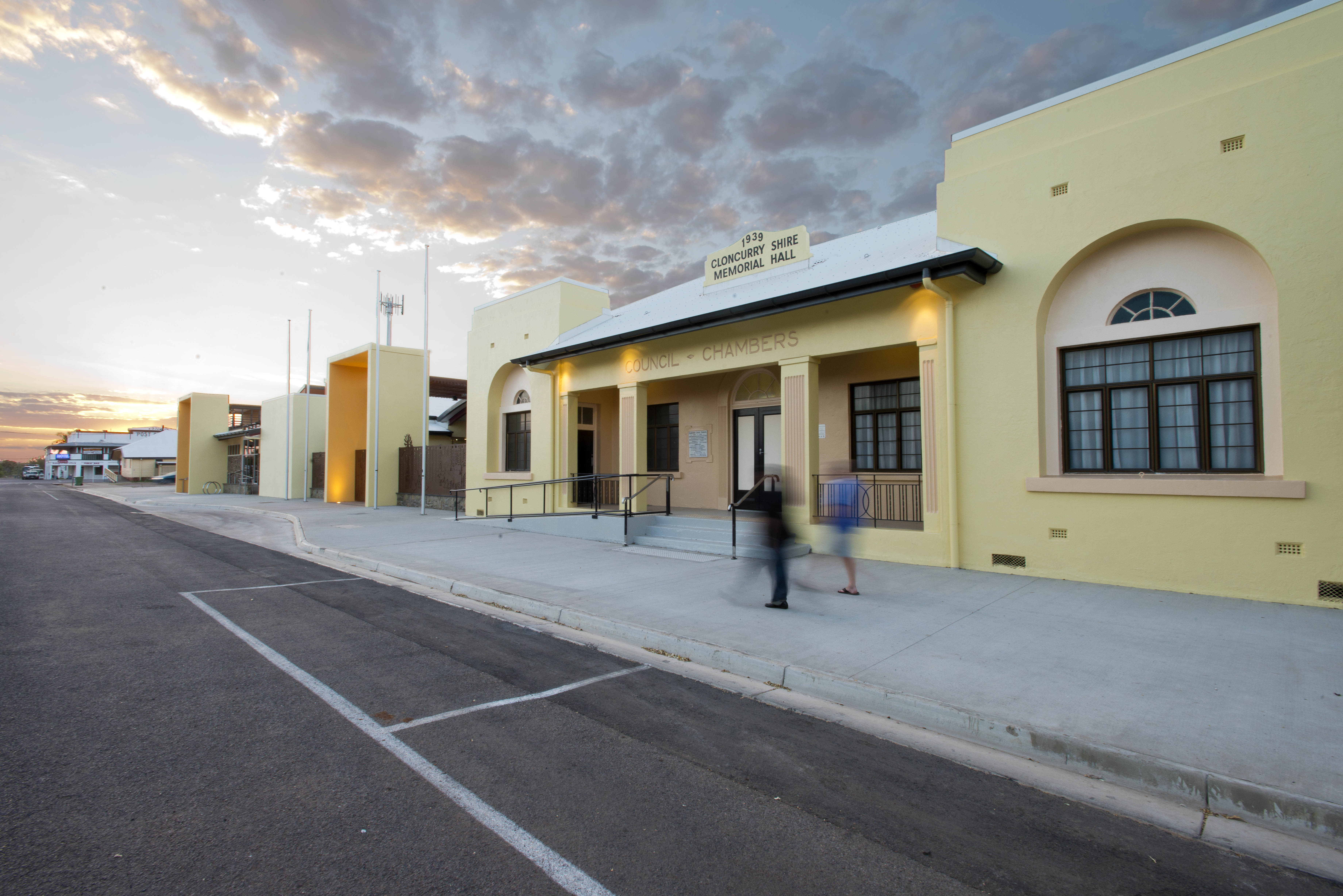 Cloncurry has a long history, that dates back over 150 years. The first meeting of the Cloncurry Divisional Board was held at the Court House on 21 July 1884. Present at the first meeting was Chairman George Seymour, Alexander Kennedy, Robert Forth Bell, Alred Australian Hart, Alexander Skyes McGillivary and Alfred Joseph Straker.

The Cloncurry Shire Council offices moved from original site to an office on the corner of King Street and Scarr Street, the old Main Roads offices, in 1988. In 2012 new offices on Daintree Street were built, which is where the Council offices are today.

In 1861 Burke and Wills with King and Gray, were the first known Europeans to come into the area on their ill-fated expedition to the Gulf of Carpentaria. Burke named the river “Cloncurry” for his cousin, Lady Elizabeth Cloncurry of County Galway in Ireland.

In May 1867, Ernest Henry (honoured as founder of the town and the vast mineral wealth of the district), came this way searching for grazing land, instead he discovered copper and named his find the Great Australia Mine. The town was surveyed in 1876 and named after the river. The Great Australia Mine still exists today as a working icon of Cloncurry’s prosperous past and present.

Over the years Cloncurry has been the focal point for many of Australia's greatest innovations. Cloncurry was involved with the beginnings of Qantas, and the original Qantas Hangar is still in use at the airport, where 'Queensland and Northern Territory Aerial Services' is still displayed above the hangar door. The airport was also en route for early planes coming from overseas and a stopping place for contestants in the Great Air Races of 1919 and 1934. During the Second World War, Cloncurry was the site of a major United States of America air base.

The Royal Flying Doctor Service was founded in Cloncurry in 1928, now recognised the world over. John Flynn’s choice of Cloncurry was based on its proximity to the mining camps and scattered pastoralists, all of whom were poorly served by any kind of medical services. At a time when his ideas seemed wild and revolutionary, he developed a scheme which combined aircraft, radios and medicine to provide a mantle of safety for inland people.

The local pastoral industry owes its humble beginnings to three noted pioneers of the 1860’s – Ernest Henry, Roger Sheaffe and Alexander Kennedy. Between them they owned many thousands of acres, stocking sheep and cattle. In the 1860’s, 71% of Queensland’s revenue was derived from the Pastoral Industry with the rural sector also providing 94% of Queensland’s exports. As the decades passed Cloncurry had the largest cattle selling yards in the North-West region. The selling yards are now mainly used for tick dipping and/or placing stock onto rail carriages and road trains. The weekly cattle sales have now been taken over by computer and paddock sales.

The railway reached Cloncurry in 1907 and was officially opened in 1908, and remains an important industry in the town.

Cloncurry is a rural town, which derives its main income from the mining and pastoral industries. The town itself is nestled on the banks of the Cloncurry River. The Cloncurry River catchment area begins in the Selwyn Ranges and flows into the Flinders River, where it continues on to empty into the Gulf of Carpentaria.

A visit to Cloncurry Unearthed Visitor Information Centre and Museum, or John Flynn Place Museum and Art Gallery will open the eye of any budding historian to the richness of Cloncurry's history.